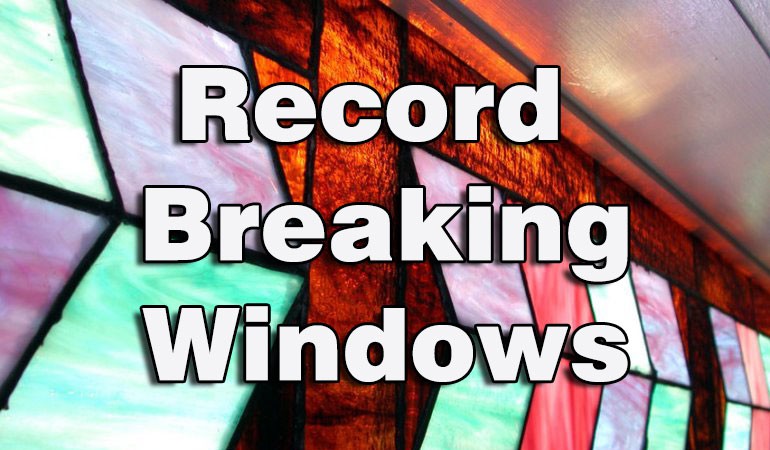 A couple of months ago, a house with the world’s largest pivoting window was finished being built. This has inspired us to look at places that have some of the biggest glazing in the world, from aquariums to historic buildings, we will cover it all!

The world’s largest pivoting windows are pretty impressive weighing in at 4 tonnes, the 20 feet tall windows look great on the new extension of this Antwerp home. Despite these being rather impressive, they aren’t the biggest windows in the world!

This is a much contested claim, but it seems the Notre Dame cathedral in Paris holds the record for the world’s biggest window. The south rose window at the cathedral is massive, measuring in at 12.9 metres in diameter, containing 84 panes of glass. This is said to be the biggest window in the world and you couldn’t ask for a more beautiful window.

The west rose window is slightly smaller but still a stunning stained glass window measuring 10 metres in diameter. It dates all the way back to 1220 AD and has most of the original glass and tracery still, an impressive feature I’m sure you’ll agree. The largest window out in space is Capula, a dome with a diameter of 2.95 metres and a height of 1.5 metres, offering the astronaughts of the ISS an incredible view…if anyone believes they have a better view out of their window, we’d love to see it! (No, seriously, send it over to our Facebook page!) The Resurrection Cemetery in Justice, Illinois is home to the world’s largest stained glass window. The mausoleum has 22,000 square feet of gorgeous stained glass making it an absolute feast for your eyes.

The area is supposedly haunted by Resurrection Mary, a young hitch hiker who gets picked up and dropped off outside the Resurrection Cemetry, only to mysteriously disappear into thin air. Spooky! The strongest glass in the world is currently being developed after a major breakthrough in 2011 where a glass that’s ‘stronger than steel’ was produced by scientists at the U.S Department of Energy and the California Institute of Technology.

The glass is made by combining up to 5 elements including a rare metal called palladium. The other metals within the glass increase the strength, whilst the palladium increases the plasticity of the glass, preventing cracks from spreading, essentially allowing it to bend under stress rather than shatter. (Image not of strongest glass) The oldest working window was discovered only in 2010 when renovation work on St Andrew’s Church, Boxford uncovered a 2 foot by 1 foot wooden window, that still opens and closes.

The window was built 1,000 years ago and is only one of 3 windows in the UK that pre-dates 1066. In those days, the window would’ve been opened and closed using hemp hinges.

Photovoltaic solar panels are one of the best ways we could lower our dependence on fossil fuels, but let’s be honest, the ones we currently put on our home’s roof aren’t the prettiest. This is why scientists are trying to develop photovoltaics that are transparent, with the purpose of being used in windows.

It seems we are getting closer to this dream becoming a reality! Researchers at Michigan State University have created an almost completely transparent solar cell that can generate electricity by absorbing the non-visible, energy making light rays. Salts within the glass absorb non-visible wavelengths of UV and infrared light and guide it to the edge of the glass where it converts it to energy.

Could solar windows be just around the corner? Haim Dotan built a glass bridge across a 1,200 foot canyon in Zhangjiajie National Forest in China, giving you unbelievable views of the unusual rock formations and rich vegetation. The 5cm thick glass bridge is suspended 1,300 feet above the ground, making it feel as though you can touch the clouds. The 20 foot wide structure is not just for tourists – there are plans for fashion shows to be held on the bridge as well as bungee jumps! China’s Hengqin Ocean Kingdom doesn’t just house hundreds of wonderful sea creatures, it also holds the record for the largest aquarium window in the world. The acrylic window panel is a whopping 39.6 metres by 8.3 metres. We finish our list with these guys who have to clean the world’s tallest building – the Burj Khalifa in Dubai. I am dubbing these the bravest window cleaners in the world as this is certainly not a job I’d like to do! Incredible views though…