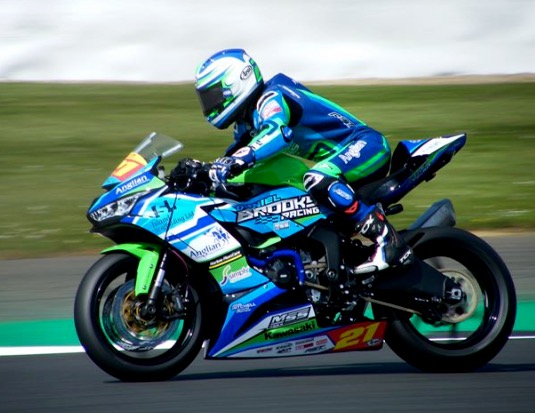 It’s been a little while since we’ve caught up with motorbike racer Daniel Brooks! You’ll have seen him on our Good to Be Home blog or if you’re a fan of racing, you’ll know he’s an up and coming star competing in the British Superbike Championships. Anglian is proud to be one of his sponsors.

Between races Daniel found time to chat to us about his busy racing life, his dreams for his future and how important his family are to him.

AHI: You spent last winter competing in Spain within the British Superbike Paddock, how did that go?

DB: I train in Spain during the winter because the facilities out there are perfect for what we need to do. There are more tracks and it’s much cheaper than riding in the UK. The nice weather means we can get plenty of track time. We run and cycle so it’s perfect for our physical conditioning, which is crucial when racing these sorts of motorbikes.It sets us up perfectly for the coming season. A lot of the racers go out to Spain, not only from our championship but from the world championships as well. 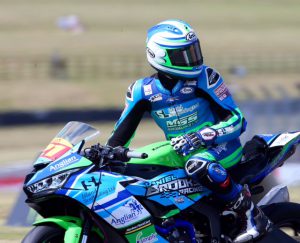 This season is going well. It’s been a big step for me, moving onto a 600cc bike with a 127 brake horse power, compared to last year’s much smaller and lighter 250 moto 3 bike with only 44 brake horsepower. I’m getting there, the team are very happy with the progress I am making. I’m starting to feel much more comfortable and at home on the bigger bike now. I’m mixing it in with the guys, so I’m learning every time I go out. The biggest challenge is getting used to the way the bike rides compared to my last one. It reacts in different ways and has a lot more power to deal with but also the speed difference is huge. But it’s all good fun!

AHI: What’s your dream this year?

DB: This is a massive learning year for me and the team. Not only is it a new bike, but it’s also a brand-new model, so there is no data to compare it to from previous years.  A new bike in a new class means loads to learn. With plans in place this season for me to learn the bike,  gather team data and hopefully have good winter test schedule, we’ll be able to attack the championship next year! My plan and dreams for the future going forward are to make my living racing motorbikes around the world at the highest possible level.

AHI: How do you get on with the other riders on the tour?

DB: I’ve got loads of friends in the British Superbike Paddock, this is a competitive and very professional championship, it’s the biggest domestic championship in the world!  All that said, the paddock is also very friendly, the racers are very professional. Everyone wants to win, and it can get very close on the track. Everyone respects each other and most of us get on well off the track.  There is also a great social scene, so it’s a fun place to be. I am getting to know more new people all the time, the top riders are also very helpful. My best friends are from the bike racing world, in fact I am off to Northern Ireland today (23/7) to spend some time with my mates from the paddock and attend a fund-raising evening watching the Ulster road races. 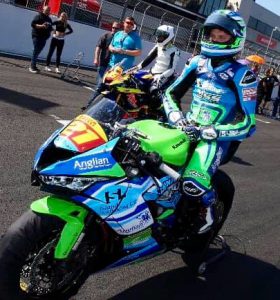 AHI: How have Anglian made a difference to your racing?

DB: Anglian have been helping me for many years now with my racing career. Without their support over the last couple of years, racing at this level would not be possible. I’m massively grateful for them giving me this opportunity and allowing me to chase my dream. It’s brilliant having Anglian as part of the team

AHI: What’s the best achievement in your career so far?

DB: I started racing off road when I was 6 years old. I’ve only been road racing for a comparatively short time – this is the start of my 3rd year. Last year I had managed to work my way from the back of the mid pack and by the last third of the season I was running with the front guys and just outside the podium places. To get to run in the top 6 of the British Moto 3 Championship for me was a massive achievement. The class I’m in this year is extremely competitive with the depth in the field much faster than previous years. Our best result is 12th so far. We’re aiming to get in the top 10 by the end of the year and win it overall, during the next two years!

AHI: What do you do when you are not racing?

DB: I’m an apprentice plumber, so that keeps me busy during the day. When I’m not working, I’m either down the gym, cycling or in the garage working on the bike with my dad.

AHI: What are your plans for the end of the season?

DB: Our plans this year were originally to go to Spain for the Junior World Championships and race in the European Talent Cup. However, I’ve grown lots over the last year and now I’m too big for the smaller 250 Moto 3 bike. We’ve had to take the difficult decision to move to the bigger 600cc bike, 2 years sooner than we would have liked. It also meant being very last minute that we were on the back foot with our testing and preparation for the coming season. Plans have changed and we’ll have a full winter testing and  training on the 600cc bike and be fully prepared for 2020!

AHI: How do your family get involved in your racing?

DB: My family help with the racing a lot. My dad is my main mechanic, drives the truck to the race weekends, takes me when I go testing so he takes me everywhere, my brother helps mechanic at the BSB race weekends, and my mum is there to help me out with my kit and feeds us all!  So they’re all very full on and help out where they can. 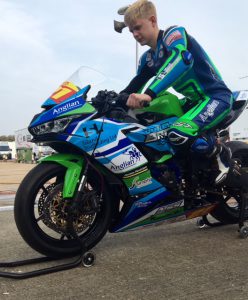 We wish Daniel all the best for the rest of his racing season! Keep in touch Daniel and we look forward to hearing the next instalment of your exciting racing career!