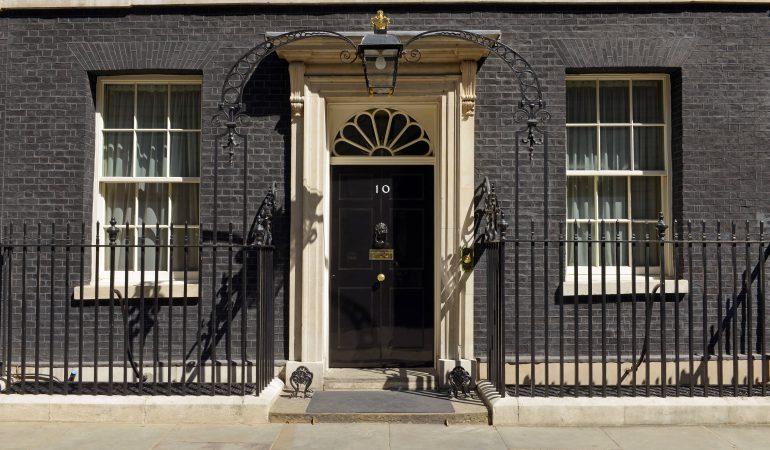 A front door can be so much more than ‘just’ an entrance to the home.  It can be a style statement, a reflection of our own personality and a way of standing out from the crowd.  A front door can elevate a property’s kerb appeal from standard to spectacular – and in some cases, it can achieve true iconic status.

Have you taken a look at our ‘famous front doors’ video?  Here is a little more information on some of the doors we included and why they are so significant.

Arguably the most famous front door in politics.  The iconic entrance to 10 Downing Street has opened and closed on many chapters in history over the past 300 years (featured image).  The backdrop of many a Prime Ministerial press conference, the door is now made from blast-proof steel rather than the original black oak.

Before the days of mobile phones, police boxes were one of the few ways people could contact the emergency services.  The police box is now more widely recognised as Doctor Who’s time-travelling Tardis, one of the true classic doors of British science fiction television.

Since the first recorded appearance on the balcony of Buckingham Palace in 1851 by Queen Victoria, we have seen the Royal Family gather in front of these curtain-festooned doors for  some of its most iconic and notable moments, such as The Queen’s official birthday celebrations, the RAF flypast, Royal Weddings and other events of national significance.

One of the memorable images of The Lord of the Rings and The Hobbit film trilogies, hobbit-holes are notable for their perfectly round, colourful front doors and windows build into the gorgeous hillside of The Shire!

The bright purple front door of Monica’s flat was central to the American TV show – which still has an enduring appeal and widespread popularity 25 years after it first aired!  The gold frame around the peep-hole was originally a mirror that broke on the first day of filming, so the cast just left it there as a quirky decoration.

Create a stand-out entrance to your very own home with a stylish front door from Anglian Home Improvements.  Take a look at our visualiser and choose a statement colour, style, bespoke glass and door furniture, to design a look which is as individual as you are.

Save on your ideal door

First impressions count, that’s why we ensure each and every door we make is finished to an exceptional standard.