Home - Women officially take up a staggering 65% of space in the house! 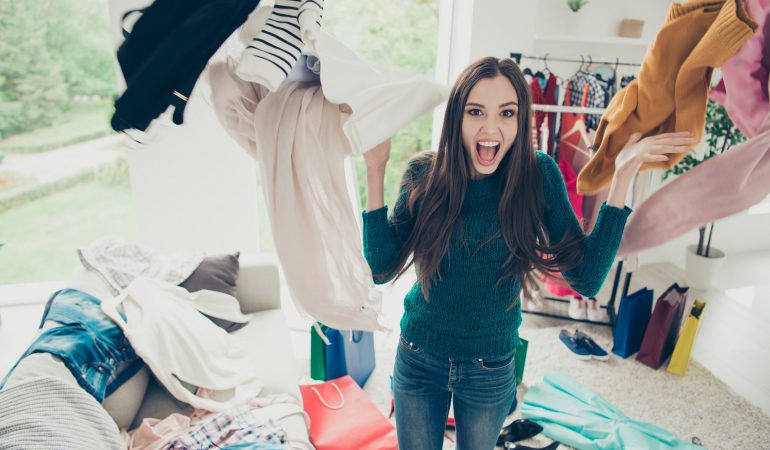 A nationwide study has revealed British couples are locked in a bitter battle over space in their homes – with females taking up a staggering 65 percent of the house with their clothes, ornaments, books and gadgets.

The study, conducted by Anglian Home Improvements, revealed that the average British man has only three drawers at his disposal for his belongings – with only 14 percent “allowed” one single drawer for all of his things.

When it comes to clothing, the average male uses only 37 percent of the wardrobe space in his house, with the vast majority dominated by his partner’s clothes, shoes and handbags.

More than a quarter (27 percent) of British males say their other half gets furious if they leave their belongings in sight around the house, with one in ten men having had their things thrown away as their partner thinks it takes up too much space.

In fact, 18 percent of men say they are allowed more space in the shed for their things than in the house, while one in ten have only one shelf of their own for all their belongings.

The study found that a massive 88 percent of women wish their partner was less messy and more organised, a sentiment which has driven 14 percent to insist that their partner keeps all of his belongings in the garage or shed.

A staggering 77 percent of Brits have argued with their partners about household storage – with those under 30 most likely to row about lack of space (80 percent).

And despite best efforts to share space, 44 percent of couples have had disputes about clutter, being forced to move house because of lack of storage.

The study found that 70 percent of men admit they are hoarders, compared to 63 percent of women. Nearly a third of men (29 percent) wish they were able to be tidier around the house to avoid arguments with their other half. A defiant 12 percent of men claim they are happy with their mess.

A spokesperson for Anglian Home improvements said, “It comes as no surprise that storage can often cause conflict in the household, at some point we have all longed for more space.

“At Anglian, we believe that having enough space for your own personal belongings is the key to a happy home that we all enjoy living in, so we can see how this can cause stress among couples. It’s interesting that a large proportion of both men and women admit to being hoarders, so it’s probably time we all had a bit of a de-clutter!”

40 percent of women admit to getting furious with their partners for leaving clutter around the house, and 44 percent have to check their other half’s pockets every single time before putting their clothes in the laundry.

Underhand tactics are sometimes employed, as nearly one in five women (18 percent) have secretly thrown away clothes belonging to their partner as they thought they didn’t suit them, and 16 percent have binned their other half’s stuff just because its very existence annoyed them.

A desperate six percent of women also admitted to nearly leaving their partner because of his clutter.

The study of almost 2,000 Brits found that the annoyance isn’t all one-sided, as 28 percent of men admit they sometimes get fed up with the sheer amount of stuff their other half has in the house. And a fifth (19 percent) of women admit to buying clothing, shoes and handbags and hiding them so their partner doesn’t get cross about the expense.