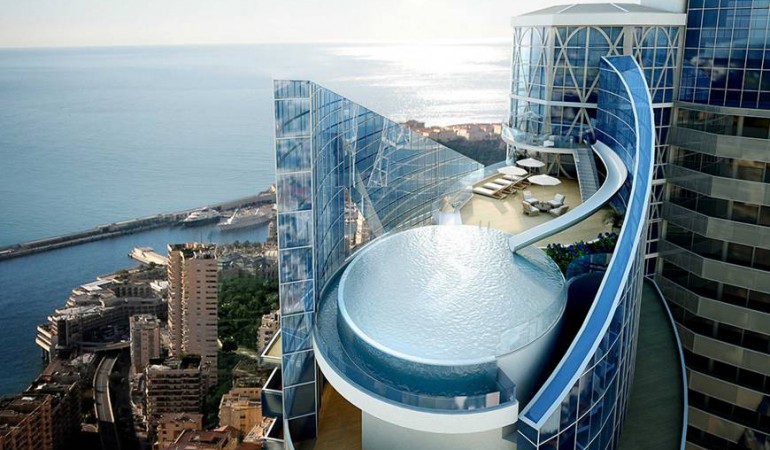 The apartment has multiple pools (for when one just isn’t enough), unbeatable views and even the inhabitant’s own private disco, though oddly enough, a communal gym which will be shared with other residents of the building. If that doesn’t put you off from making a bid, you can enjoy views of the coastline from the gym and other parts of the building from the floor-to-ceiling windows and outdoor terrace. At 35,500 square-feet, the penthouse is almost $11,000 per square foot. The actual advertisement brochures alone for the development cost the company $1000 each to produce. Luckily for the developers of the construct however, nearly 30% of Monaco’s inhabitants are millionaires, so finding a buyer shouldn’t actually be too difficult. The new skyscraper will be Monaco’s first skyscraper construction in 30 years, so it’s no surprise they want to make a (slight) impression. According to Yahoo! Homes, the current price tag of the penthouse is almost twice that of the current record holder, a unit in London’s One Hyde Park that sold for $223 million. Developer Niccolo Marzacco told Challenges, “A property like this one is bought, it is not sold​.” The future owner of this apartment will accommodate in September 2015, and can get a glimpse of life in their new home from the photo-like artist renderings of the building, which will be 170 meters above sea level.