Home - Home Inspiration - The Evolution Of The Family Home 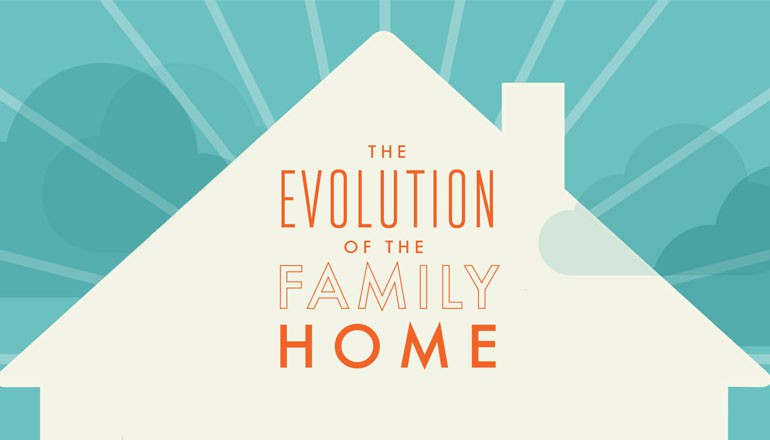 Technology, social change and the way we work have drastically changed the British home over the last 50 years. From how long we spend on housework – 44 hours per week in 1965 – to tech that helps us save money every day.

Anglian Home Improvements undertook some research into how British homes have evolved in the last 50 years. Read more about the 50 Years survey.

Take a walk through the last five decades of evolution with The Evolution Of The Family Home! Have you kept any old items for nostalgic effect, or are you yet to properly clear out the loft?

Do you think we missed any important aspect of home evolution? Let us know in the comments.

Our homes have come a long way since the 1960’s, as have women’s roles within it.
How have our homes & families evolved in the last 50 years and what do we want in the future of housing?
1960s Dining Room
• 56% adults love separate dining rooms, while 38.9% open plan kitchen/diner living spaces trend
• 46.9% of homes had a dining room which decreased to 42.5% in the 80’s and raised to 50.6% in 2009
• Women began to demand men do a greater share of housework
• 1965 women spent 44 hours on housework today only 18.2 hours per week
• 25% of people agree the most significant social change over the past 50 years in the way we use our homes is men and women sharing tasks.
57% agreed separate dining room was most loved improvement trends over the last 50 years.
1970s Kitchen
• ‘Housewife’ began to fall out of usage
• Dishwashers transitioned from fringe item to necessity
• In 1972, 37% of households in UK turned to central heating.
• 66% of households said central heating has revolutionised homes the most over the last 50 years
• Equal pay act 1970 was fully implemented in 1975.
• The UK introduced its first maternity leave legislation through the Employment Protection Act 1975
• In 1972 42% of households had a telephone
• In 1979 James Dyson patented the bag less cyclonic vacuum cleaner.
• Front loader washing machines become dominant in UK
• Today, a third of women (37.7%) felt they couldn’t do without an automatic washing machine, compared to just over 1 in 5 men (22.6%).
• Almost 1 in 3 said the cooking space was the area in the home people most looked to improve on 40 years.

1980s Living Room
• Adam Osborne invented the first portable computer in 1981
• In 1985 13% of household had a computer
• In 1985 women’s share of professional jobs increased to 49% and their share of “management” jobs 36%
• In 1982 10% of households in the United Kingdom owned a VCR
• 67% of women were working
• Married women with a graduate education earned 11 percent less than married men with a high school education
1990s Bathroom
• In 1992, the first ultrasonic toothbrush initially known as was given the ‘nod’ by the Food and Drugs Administration (FDA) r to be used in households.
• In the 1990s coloured bathroom suites were in fashion, either the avocado green or a blue or pink shade.
• All homes built since 1990 are fitted with water meters.
1 in 2 of those surveyed said indoor toilets has made the most positive difference to our homes over the last 50 years with saying running hot water and 41% insulated windows.
2000s Bedroom [maybe baby in a cot?]
• Women spend an average of 11.5 hours doing housework, while men complete just six per week
• Paternity leave was introduced to UK in 2003
• By 2008, 90% have double-glazing windows in their homes
2010s Home Office
• In 2011 86% of people owned a mobile phone.
• In 2011 all households, 98% had central heating.
• 80% of households had a home computer
• In 2015, New dads employed by Virgin able to take up to a year’s paternity on full pay
• The total amount of electricity consumption by household grew by around 2 per cent per year between 1970 and 2014
More than 1 in 5 adults said the ability to work from home due to technological advances had also influenced the way we use our home

FUTURE Basement
• We want smarter homes with advanced technology and artificial intelligence
• People want to be able to use smart phones to control everything in our home.
• 1 in 3 adults aspire to or have aspired to have underfloor heating in their homes
• Today homeowners are most looking to improve their entertaining, cooking and relaxing spaces (26%, 25.3% and 17.3% respectively).

I'm a writer and editor who studies MA Writing at Liverpool John Moores university. My biggest home interests are tech, upcycling and feng shui. Let me know if you find a combination of the three.